Halbmarathon Altotting is the pilgrimage village of Germany close to Bavaria.The Royal House of Germany has had a particular devotion to Our Lady of Altotting since the Middle Ages, a preference that had become a tradition. An urn in the “Virgin’s chapel” still holds the hearts of dukes and kings of the ruling family of Wittelsbach (family of the famous empress Sissi).

The OMV Halbmarathon Altötting is a 5 Star Quality Road Race – awarded by European Athletics and German Athletics Federation. It is the first German race to receive five stars!
The international OMV Half Marathon Altötting has been taking place in Altötting, in the “heart of Bavaria”, for 29 years. What started small was continuously expanded by a 6 km road run and a 1300 m hobby run and is now one of the top half marathons in Germany not only because of the listing in Runners World.

FASTEST NATURAL RUN IN THE WORLD:

80% of the route is on paved forest paths and the Altöttinger Forest offers pure nature. Experience the experience, you will be amazed! Incidentally, the route is one of the fastest in Germany, which the best times for women 1:08:38 and men 1:01:39 confirm.

We “drive” you the last kilometer to the finish with atmosphere. From Samba drummers to hard rock band, let yourself be surprised! 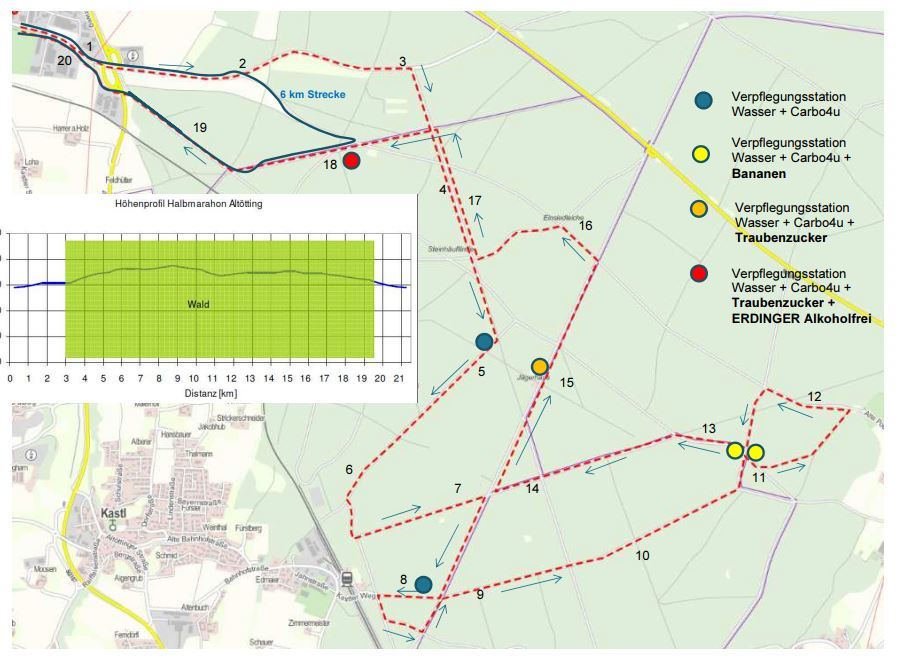 Halbmarathon Altotting is the pilgrimage village of Germany close to Bavaria.The Royal House of Germany has had a particular devotion to Our Lady of Altotting since the Middle Ages, a preference that had become a tradition. An urn in the “Virgin’s chapel” still holds the hearts of dukes and kings of the ruling family of Wittelsbach (family of the famous empress Sissi).

Due to the special bond between the citizens or the territorial lords with “Our Lady’s” pilgrimage site, the shrine came to be known as the “Heart of Bavaria”. A second major pilgrimage destination is the St. Konrad Capuchin Church featuring the reliquaries of Konrad of Parzham, a custodian monk who was canonised 75 years ago.

Suggested Schedule for a ‘Day of Pilgrimage’
(Saturdays, May – October)

10:00 You attend Holy Mass in the Brother Konrad Church

11:00 You take part in a town tour “Altotting: 1250 Years Heart of Bavaria”. Trained guides explain the historical development of the town and of the pilgrimages, show you impressive churches around Kapellplatz (Chapel Square) and give you plenty of information about Altötting. (Duration: 90 minutes; price per group 61,00 Euro upon request at the tourist office): Entrance to museums is not included.

In the afternoon, you’ll visit the ‘Treasury and Pilgrimage Museum’ at the Haus Pope Benedict XVI featuring the famed ‘Golden Horse’ and the monumental panoramic painting of Jerusalem and of Christ’s Crucifixion, as well as the ‘diorama show’.

20:00: You attend Vespers at the Basilica of St Anne, followed by a procession of lights. (September/October 19:00) 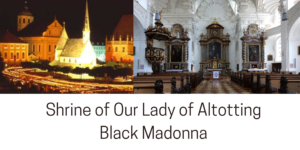 During the terrible period of Nazism the shrine and its pilgrims were persecuted, but the number of pilgrims coming to Our Lady of Altotting only doubled. In 1934, Pope Pius XI solemnly inscribed the name of Capuchin lay brother Conrad of Parzham in the list of Saints. Saint Conrad held the office of porter at Altotting for over thirty years.

He ate little, slept even less and worked hard, and remained always in communion with Christ, the God of his heart. He was also known for his Marian piety. Conrad had the gift of prophecy and of reading people’s hearts.

To the young and old alike, to the polite and impolite, the saint was always kind and gentle. He died in Altotting on April 21, 1894. That year more than half a million pilgrims came on pilgrimage to Altotting!

There are no reviews yet.

Be the first to review “OMV Halbmarathon Alltotting” Cancel reply